Free machine embroidery of Twitterpated Birds and Blog about Twitterpation

APRIL ;  THE MONTH FOR TWITTERPATION!

I see the Mocking birds hopping on the fence and dancing up and down doing a dance you do not see them perform in the summer or winter. I look out the window and see the cardinals carelessly hopping around on the grass, chasing each other and being totally oblivious to that green-eyed fur baby watching every move. 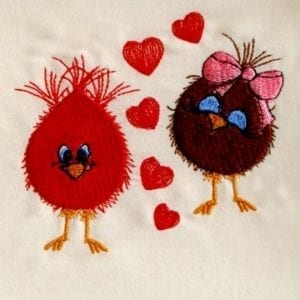 So, although dinner is cooking, I quickly shut off the stove and with my kitchen towel in hand, I streak out the door and flap my arms, attempting to save their lives….. return to the stove only to look out again and see them acting giddy and foolish, chirping away as they sit on the top of the lawn chairs, dangerously flaunting their wonderful red costumes, again tempting 3 fur babies. Yes.  Its April and they are twitterpated.

Twitterpated is an adjective which attempts to describe that indescribable excitement, characterized by over stimulation.  For instance,  the acceleration of a heartbeat and rise in body temperature due to the chemical crashing of hormones when one feels those chicken bumps or goose bumps when experiencing love, be it a first time or a new love. Yes. April is when a most creatures, two and four legged, become twitter pated.

Now, since April 1st is April fools day doesn’t it make good sense that someone twitter pated, acts like a fool, totally losing control of all good and common sense?

April is, of course, my favorite Month. It is my whole family’s birthday and it’s spring. Everything springs forth. Everything is turning green and turning beautiful. The ugly brown left from winter™s cold disappears and bald trees and bushes suddenly burst forth in leaves and color. Yes, and Mother Nature is busy encouraging the birth of all creatures to replenish the earth.

The origin of the word appears to have been around 1942 when first used in the movie of Bambi. Who could possibly say it better than Friend Owl, when speaking to Thumper and Bambi:

Yes. Nearly everybody gets twitter pated in the springtime. For example: You’re walking along, minding your own business. You’re looking neither to the left, nor to the right, when all of a sudden you run smack into a pretty face. Woo-woo! You begin to get weak in the knees. Your head’s in a whirl. And then you feel light as a feather, and before you know it, you’re walking on air. And then you know what? You’re knocked for a loop, and you completely lose your head! ..And that ain’t all. It could happen to anyone, so you’d better be careful.

I’ve always loved that word. I use it frequently in the spring when I see adorable creatures acting giddy and foolish or when I see a daydreamer, smiling at the ceiling. No doubt, they are indeed twitter pated. The marvelous talent of those Disney animators and storytellers in the good old days, sadly, will never be repeated. When I see previews of the claymations and weird looking creatures now forced upon us, I wonder if Walt Disney is groaning in his grave at some of the Disney productions. I for one, do not like them. They cannot begin to compete with the beauty, tenderness and charm of the original beautifully illustrated and animated movies. How sad to discard such great talent. Just give me Bambi, Thumper, and all those charming Disney movies.

The birthstone of April is the diamond and we all know that diamonds are a girls best friend. They certainly are my favorite! And, I have managed to collect several since it is my birthstone! The birth flower for April is typically listed as either the Daisy or the Sweet Pea. I love them both.

From whence did the month of April derive? Well, you have to understand that at one time according to the Roman calendar, March was the first month. So naturally, April was the second month of the ancient Roman Calendar, which was dedicated to the goddess Venus. Therefore, one theory is that April could be from the Latin word April is (month of Venus); or (2) the Latin word apeire, which means to open, referring to the season when trees and flower s begin to open or (3) some believe the name April was derived from the Greek goddess of love, Aphrodite.

None-the-less, it iss a wonderful month in my eyes.Who could ask for more, Twitterpation, Diamonds, Daisies and LOV