Free Machine Embroidery for St. Patrick, and Blog about Ides of March

The shamrock, which looks like clover, has 3 leaves per stem. According to legend, Saint Patrick brought religion to the Irish people. He taught them that the shamrock was representative of the Trinity in that there are three diving beings in one God, i.e. the Father, the Son and the Holy Spirit.

Although the legend that is told states that St. Patrick drove the snakes from Ireland, in reality, Ireland has no snakes because it is an island, separated from the rest of the continent so the snakes could not get to the island. Therefore, it appears that the analogy of St. Patrick to driving the snakes out of Ireland is a metaphor for St. Patrick bringing Christianity to Ireland and driving out the pagan religions, since many of the pagan religions used serpents as a symbol in their worship. 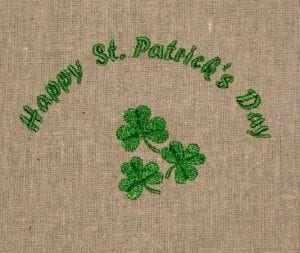 THE IDES OF MARCH

The earliest known Roman calendar organized its months around three (3) days, which served as a reference point for counting other days. Those three days were:

Therefore, although it is not widely discussed, the Ides occurs each and every month of the year on either the 15th or 13th day of the month, depending on the month.

The Ides became known due to a narcissistic fellow known as Julius Caesar. In a “nutshell”, Caesar emerged as the leader of the Roman world after some events, i.e., the first invasion of Britain, the death of Crasus and a standoff between Caesar and Pompey, which sparked a civil war and Caesar emerged as the winner . He then:

A group of senators were not happy with the Caesar dictatorship and wanted to go back to their prior Constitutional government so under the direction of Brutus, they conspired to assassinate the dictator. The assassination took place on the Ides of March.

Beware of the Ides of March has since morphed into a date with a sense of dread or foreboding, since it was the day of the murder of Caesar.

Fancy that .the IRS deadline for taxes is near the Ides of April ….What a novel idea!