SOME LEGENDS ABOUT CHRISTMAS

Legends abound about most things and many are abundant and conflicting. Some are familiar, some or not, but it is always interesting to look back at history and reflect on how traditions developed from the various parts of the world. Regardless of our beliefs, we are all shaped in some way by the many traditions which have developed throughout centuries of history and all are interesting and extremely important to each of us who follow our specific tradition. These are but a few of the numerous legends:

It is said that Saint Francis of Assisi visited the Holy Land and was shown the birthplace of Christ. Thus, upon his return home, he was inspired to construct the first nativity scene somewhere around 1223, to remind people of the holy birth. This Manger/nativity scene was said to have been a “living one”, i.e., using live people and animals to depict the scene. 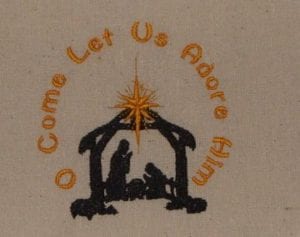 One beautiful legend states that three virtues, being Faith, Hope and Charity, were sent from Heaven to find a tree as high as hope, faith as great as love, as sweet as charity and specifically, that the chosen tree must have the “sign of the cross” on every bough. Faith, Hope and Charity searched the forests of the North until they found the evergreen Fir tree. It was lighted from the radiance of the stars and became the first Christmas Tree. Another legend states that Martin Luther was walking on a bright snow-covered, star-lit night thinking of the birth of Jesus. He was awed by the beauty of the evergreen trees and the stars so he cut a tree, took it inside and put candles on it to represent the birth of Jesus coming from the stars to bring us eternal life. Thus, his interpretation was that the evergreen tree is meant to remind us of the “everlasting life” and God’s forgiveness of sinners. The lights on the tree are meant to remind us that Jesus is the light of the world.

Legend has it that the Candy Cane represents the Shepherd’s crook, the Shepherds being amongst the first to arrive after the birth of Jesus. The colors of the candy cane have special meaning as well. The white stripe is a symbol of purity. The “wide” red stripe represents the sacrifice of Christ. The narrow red stripes are meant to represent our own human sacrifices. The peppermint plant which flavors the candy cane is in the hyssop plant family, referred to in the Old Testament, was used as a medicinal herb for cleaning.

Early in history, many wreaths were made of holly since the Celts believed that holly had magical protective powers. Roman mythology told that holly was sacred to Saturn, the sun god and pagans worshiped holly. Another tradition known as the Advent Wreath appears to be a Lutheran custom that originated in Eastern Germany. Advent for most churches in the Western tradition begins on the fourth Sunday before Christmas Day (Sunday usually nearest November 30) and ends of the Christmas Eve (Dec 24). The “Advent” symbolizes the “coming” or “arrival” of the birth of Jesus the Christ in his First Advent and the anticipation of the return of Christ the King in his Second Advent. The round Advent Wreath was meant to symbolize God’s eternity and mercy. The Evergreen of the wreath meant to symbolize God’s “everlastingness” and our immortality. The Advent wreath had/has four (4) candles. Three of the candles (representing the 3 weeks prior to Christmas) were/are purple/violet which represents penance, sorrow and a yearning from the deliverance of evil. The final week prior to Christmas is represented by the rose/pink candle, representing the hope and joy and deliverance by God who has heard the cries of the people for deliverance. Advent wreaths, minus the candles are the traditional Christmas wreaths displayed by many at Christmas.

There are numerous mistletoe legends. It is said that some Christians believed that the cross on which Christ was crucified was made from the Mistletoe Tree, and the tree was so ashamed that it shrunk into a parasite bush. Another legend is that the Druids believed that the Mistletoe had magic powersâ€¦. so long as it never touched the ground. It was harvested with a golden sickle and the priests would give branches to the people to ward of evil. Another legend states that the English would place mistletoe over the doorways for good luck, believing that only good luck could pass under the mistletoe and therefore their enemies passing under the mistletoe would give a kiss of friendship and seal their peaceful intentions.

The earliest reference to pre-Christmas songs seem to appear in fourth century Rome. Then much later, rhymed stanzas appeared in North European Monasteries during the ninth and tenth centuries. In the thirteenth century, mainly due to the influence of Francis of Asissi, a strong tradition of popular Christmas carols developed in Italy, France and Germany. Christmas carols in English first appeared around 1426 through the work of John Awdlay, who penned/listed twenty five “caroles of Cristemas”, which most likely were sung by groups of ‘wassailers’, who went from house to house singing (wassailing), during celebrations like harvest tide and Christmas.

The Harvest Tide or The Gathering of the Harvest has been celebrated for centuries around the world in the form of harvest festivals or by giving thanks at Thanksgiving celebrations. The celebration of Thanksgiving, celebrated each year in the USA and Canada, is relatively ‘new’, in historic terms but harvest festivals, from Egyptians to Pagan practices in Europe, have been celebrated for centuries during the gathering of the harvest to give thanks to the Gods for the food which has been provided. The celebration dates are different, depending on the country, the season and timing of the gathering of the harvest varies but traditionally harvest festival is associated with the months of Fall and the harvest moon. Various calendars show that the United Kingdom celebrates its Harvest Festival in September, Canada in October and the United States in November, although it is disputed that the early USA celebration’s took place in September.
Therefore, Carols were shared with Harvest Tide and it was not until much later when carols were specifically associated with Christmas, sung in churches and were referred to as “Christmas Carols”.

Give Thanks to our Troops for their Sacrifices:

In this Holiday season, from Thanksgiving, counting down to the advents of Christmas, let us be thankful for all that we have, thankful for our military members who provide us freedom, and thankful for each other and the diversity to which we are exposed due to different ideas and traditions.

Have a Happy Holiday and a Merry Christmas……